WhatsApp me if you interested
【SUMMARY】
Serum amyloid A (SAA) proteins are a family of apolipoproteins associated with high-density lipoprotein (HDL) in plasma. Different isoforms of SAA are expressed constitutively (constitutive SAAs) at different levels or in response to inflammatory stimuli (acute phase SAAs). These proteins are produced predominantly by the liver. The conservation of these proteins throughout invertebrates and vertebrates suggests that SAAs play a highly essential role in all animals. Acute-phase serum amyloid A proteins (A-SAAs) are secreted during the acute phase of inflammation. These proteins have several roles, including the transport of cholesterol to the liver for secretion into the bile, the recruitment of immune cells to inflammatory sites, and the induction of enzymes that degrade extracellular matrix.

Serum amyloid A (SAA) is also an acute phase marker that responds rapidly. Similar to CRP, levels of acute-phase SAA increase within hours after inflammatory stimulus, and the magnitude of increase may be greater than that of CRP. Relatively trivial inflammatory stimuli can lead to SAA responses. It has been suggested that SAA levels correlate better with disease activity in early inflammatory joint disease than do ESR and CRP. Although largely produced by hepatocytes, more recent studies show that SAA is produced by adipocytes as well, and its serum concentration is
associated with body mass index. C-reactive protein (CRP) is an annular (ring-shaped), pentameric protein found in blood plasma, whose levels rise in response to inflammation. It is an acute-phase
protein of hepatic origin that increases following interleukin-6 secretion by macrophages and T cells. Its physiological role is to bind to lysophosphatidylcholine expressed on the surface of dead or dying cells (and some types of bacteria) in order to activate the complement system via C1q. CRP plays a role in innate immunity by binding to the phosphocholine expressed on the surface of dead or dying cells and some bacteria. This activates the complement system, promoting phagocytosis by macrophages, which clears necrotic and apoptotic cells and bacteria.

【DIRECTIONS FOR USE】
Bring tests, specimens, buffer, and/or controls to room temperature (15-30°C) before use.
1. Remove the Test Cassette from its sealed pouch, and place it on a clean, level surface. For best results, the assay should be performed within one hour.
2. Open the tube with the diluted sample .Transfer 3 drops of diluted sample （approximately 120 μL）to each sample well(S) Start the timer.
3. Wait for the colored lines to appear. The result should be read at 5 minutes. Do not interpret the results after 10 minutes. 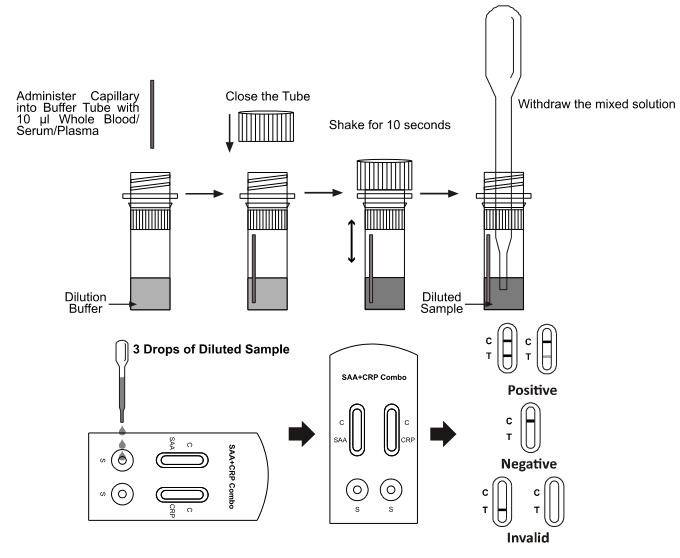